Welcome to my Magical Monday. Tobril basically told me to get regular on my writing schedule again. So i am going to try. If i have things i have to fit into my week, i tend to get them at least mostly done.

So lets look at two master pieces from this last weeks FNM the first is my deck the second is my son’s. Sorry for the grainy images, I will do better in the future. We drew in the finals to clinch first and second for like 12+ boosters. 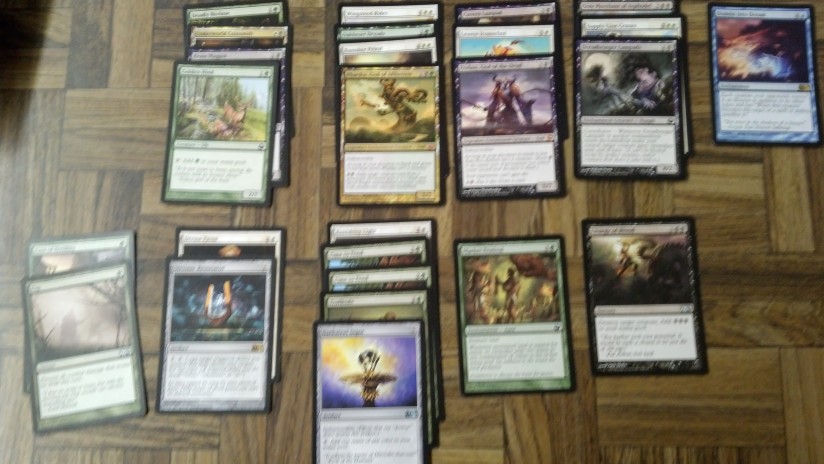 First off better lucky then good, opening Pharika (easy first pick) was a good sign for the night as i wanted to go “Constellation” knowing that we had a weird draft set of Journey, Theros, Core M14. I was passed Underworld Coinsmith second, another card i wanted to try out for myself. So i knew i was base black and willing to go 3 color so i needed to value color fixing fairly highly. A third pick supply line crane put a twist into my plans but i pushed on.

In pack two the black gods were calling my name with Erebos just begging to be slammed down. A couple time to feeds, a wingsteed rider and a grey merchant where clear winners from this pack.

I had high hopes from Core 2014, a Blightcaster would have been the nut but a first pick Strionic Resonator with all my Constellation/come in to play triggers was also amazing. Then i picked up Dismiss into Dream kinda late. But i thought i could make it work, and it did in the fun games vs my son that we played but the only time i drew it on the way to undefeated land my opponent killz it right away. He knew the power!

Over all the deck was really strong. A good control shell and ramp shell with some real fat finishers. For the record wingsteed rider and trollhide are more or less glued together. I don’t think i ever drew one with out the other a card or two behind.

One game really stands out to me where i had a devotion to 4 on board and a grey merchant in hand but i waited until i could also activate the Strionic Resonator and drain for 12. Then let the Underworld Coinsmith due its thing. Speaking of Strionic Resonator, there was a moment where i played Banishing Light and ate 2 dudes. Oh come into play triggers you are the best!

In the fun games Remmie was able to agro me out 2-1. I guess that Suntail hawk + cheep bestow guys is also a way to win. But he loves to draft live gain decks and with Angelic Accord he had ways to gain live and make flying ladies.

Hope this was fun for you all. Look forward to more Magic every Monday.