Have you heard about the Tiny Leader format? It seems to be taking Kansas by storm. Seems like all the shops around here has started to support this new format. It seems cool to me, all the perks of commander or EDH as us old guys might call it, with out a lot of the BS that i don’t love of the older format.

I have been working on some lists or at least conceptual ideas that i might form in to actual decks. And i want to share one with you all today. So many years ago i was just ending one of my long breaks from Magic and i was getting back in to Magic and one of my favorite sets just hit, Mirrodin. 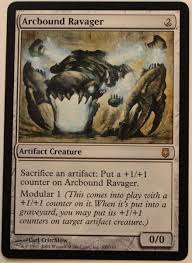 Disciple + Ravager and a ton of disposable income artifacts often destroyed people in the way back.

So if we have a ton of cheep artifacts and artifact men like Arcbound Work, Steel Wall, and some older guys like Phyrexian Walker, Shifting Wall. Fun draw card spells like the different baubles, Chromatic Star/Sphere/Terrarion just for the hell of it. But if you start down the path of free or super cheep spells wouldn’t it be nice to do some thing like add a storm element? Grapeshot or Brain Freeze action could worked in with ease. Add in Ashnod’s Altar, Culling the weak, Dark ritual along side Cloud of Faeries/Frantic Search to fuel draw X spells and you might have a real mill sub-theme going on here. Just don’t forget your Glimpse the Unthinkable!  Adding in blue is worth wild any way as there are some great little monsters to help with this theme, like Master of Etherium, Tidehollow Strix Skill Borrower, Trinket Mage and Sygg, River Cutthroat and you are real close to your 32 ish non land cards.

I don’t know how well it will work yet. But i will be trying to put this thing together in the coming weeks. When i get it finished and get a few games under my belt i will let you know how it goes.

Well once again i ended up taking longer to look up and insuring that i spelled all the card names right and it is Tuesday…. Oh well i am not changing the name now.

Welcome to this edition of Magical  Tuesday, i was under the weather yesterday and my head was screaming. But lets talk about magic.

This weekend was solid one for the Gurobo family. The wife took down the FNM draft with a sweet mono black deck. The shop was drafting M15 btw, a format that i really think is a fun draft format with a lot of different decks available to good drafters. Remmie, the son, drafted a sweet deck as dropping a match to blue fliers a theme that will run through weekend.

Saturday, was Fate Reforged Gameday. I had planed to use the artifact agro deck but Remmie decided that he wanted to use it so i moved over to the red/white burn list i have been playing/writing about for a while now. And the wife took the temur deck i have been working on for her.

Thankfully there were enough people that we didn’t have to face off right away, in fact the wife and boy didn’t have to play each other until the simi-finials, where the wife took the boy down and proceeded to take down the tournament.

Sunday was our Store Vs Store match with Midnight Games in Hutchinson, an event that had slipped my mind until Saturday. Groan…. I was already starting to notice that bug that took me down Monday. But we pushed on. Wish the wife would have came along, her hot streak might have carried over for one more event as it was we got rolled instead.

I ended up drafting a 2-2-0 deck, either taking a fast 2 games or a punishing game 3. But i think my deck was build wrong until the third match were i cut a land for a 6 mana spell. I had the mardu agro deck and i thought i would win with my curve just being super low and attacking as often as possible, but 17 lands and 3 4 casting costing spells was just not enough power for when the game went long. And drawing the 5th land plus was a death-nail. But cutting a land and adding in the red uncommon dragon gave me some possible end game. But really all it did was get countered one game but it did clear the counter out for my red siege which i decided is amazing.

So other then getting sick and some family drama it was a really fun weekend of family magic fun.

So lets look at something new, this is a list i have taken right off TCGplayer.com and i think it is fairly good. I don’t love the sideboard but other then that i really think i would enjoy this thing.

There is something about Ugin’s Construct isn’t there?

Sort one today as i am watching Legend of Korra and it is amazing. Sometime this week i will knock out an updated burn list.

Earlier today i popped into my local game store, to check in and see if there was anything i needed to take care of on the website and/or the like. And while i was there i was asked what i liked in standard for this weekend.

With out a second thought i said my red/white deck. I feel that it got a ton of cards with Fate. But i talked about it a lot last week. But then i said i was drawn to the idea of the Temur Ascendancy Combo deck that was “found” this last weekend. I feel that my Yisan deck could be warped into such a deck with ease and i also think that i could keep Yisan and his silver bullets in the sideboard for when it is the best deck.

So after an afternoon of looking at lists and debating on how i could best make this shell my own i have the following:

So i have to assume you have an idea as to how this goes off but let me try to run it down in a nut shell.

Temur Ascendancy gives haste, untapper/Nykthos or Karametra’s Acolyte (for 7) + Singing Bell Strike or Temur Sabertooth equals lots of mana. All the mana in the world in fact. Then you can use things like Genesis Hydra to play any number of guys until you have a killing team or one trample Mistcutter Hydra at 100/100 for the solo win.

The Sage of Hours + Sandsteppe Mastodon allow you to talk all the turns to try and find the combo if you have a Temur Sabertooth and lots of mana but no Ascendancy but really it is a way to counter a Ætherspouts. I will go again thank you.

Overall, this is my kind of deck. Complected with lots of right and wrong plays that i can try and use to out play my opponents. Best of all other then the Temur Sabertooths and the Sandsteppe Mastodon this deck was totally standard legal a few weeks ago and no one saw it.