And JAM! Look who got his update done. That’s right, this guy! Even though i did two hours on DDoCast today i was still able to knock it out. There are ducks at the end so look for that. Also i guess the final duck names have been chosen. I will have to get them all typed out from the boss. I don’t tell you wrong. Ideally the ducks could become fairly well trained and could follow some commands and that seems cool to me.

Anyway if you are in the market for eggs let me know the chickens must have stepped things up, because yesterday i had the boy get eggs in the afternoon and there was around 30 eggs in the coop and he claims to be bringing in eggs everyday. 30/Five hens equals a really busy group of ladies.

Just got a txt message from the wife. 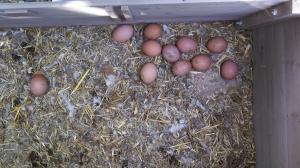 Yep, time to start saving big $$ on eggs. 11 eggs from 5 girls. I know what i am doing this weekend. Butchering some cocks….

Took a video last night of the chickens (they are getting big) playing in the new run extension and the new perch i threw together out of some scraps.

If you follow me on twitter you know that there was a chicken/dogs encounter of the bloody kind. Basically one of the roosters got out of the extended run the wife and I have been working on and when the wife when to check on the greenhouse and naturally the dogs went along. Now we have dog tested the new run before yesterday so I was not worried about the dogs getting in but I didn’t think about a chicken getting out….

From what I was told there was a frantic yard chase until the poor little guy got pinned in a corner where the wife was able to save him. During the chase the dogs (older puppies? Maybe they just hit 2 years old last week) managed to snag some tail feathers and ripped them out and along with those feathers a small patch of skin less then the area of half a dime. If that even. I mean tiny little patch of skin.

Being the caring woman my wife is she put the wounded cock in the coop with the rest and shut down the extended run until we could fix the fault, which we did last night.

What she didn’t notice was he was bleeding just the slightest amount. Now what some of you might not know, chickens will peck at anything that is the color red. It is their peck trigger. That is why the water/food dishes are red in the tray area. So this tiny speck of blood that we over looked was not missed by the other chickens and they started pecking at his wound. At lunch it was not bad but not healing and we ended up separating him from the rest of the flock which he really did not like. Did you know that chickens are social animals? And this guy really made me worry that he would end up hurting himself trying to get back. After all he was now hurt, scared and alone… I would be a little more then that, I would be pissed off it was me and not that chicken…

Returning to work, I let my brain start to turn on this problem. Work doesn’t pay me enough to use my whole brain anyway.. The first option I thought of was ducktape! It can fix anything, and is meant to tape ducks… How much different is a chicken vs a duck?  Then I started thinking that I didn’t want to pull the tape free in a week or two and cause even more issues…. Then I remembered I read some woman that makes chicken diapers from bandanas so her chickens can go in her house… My brain screamed bandana!

Or that was the idea anyway. On the drive home it accured to me I have a growing boy that should have some old white tees that he can’t wear any more and snip snip later I had a square cut and fitted to the bird. But letting him run for a min showed that was not going to work… Not only did he peck at the tee because it was rubing against his skin, but as he ran it twisted because I didn’t want to tie it too tight.

A little more thought and some more cutting I made something that looked a lot like the letter T but with a thick trunk… Like this:

Saved by the letters T and A and the number 42!

I looped the to thinner part of the T under his wings and tide them together behind his back and then used a hair clip to keep the back of the shirt down so it can’t flip up and expose his wounded backside.

After some mild pecking at the knot he seemed settled and adding him back to his flock caused some mild peeking at the hair clip as it is kinda shiny but no more back damage. We did need to trim some wing feathers to remove some dried blood but now he is as white as the rest of the Leghorns.

We (the wife and I) added a permanent chicken wire top to the new run and life seems to be good for the chickens. We used the new addition to move said chicken’s coop last night and then left the run open all night. This morning when I looked in on them, all 8 were happily spread out over their original run and the new addition.

Oh yes i am a like/share/comment whore.