Assuming that most of you follow me on Twitter, twitter.com/samiusgurobo if you don’t. Or we are friends on Facebook or have at least dropped by and check out the DDo podcast i do at DDoCocktailhour.com lately,  you should know that i have been following another person’s build for this last life on Samius. Geoff Banana Hanana’s FeyBuckler. I have tweeted him updates as i have been playing. Thinks i have learned along the way and tweats i think work best for the build as i see the game. My jaded jaded version of the game.

He has even written a follow up or two on the build, which you can read here. And i think he wants to know, is the build good? I will try to answer that at the end. But i want to touch on my changes vs his according to a couple of screen shots. 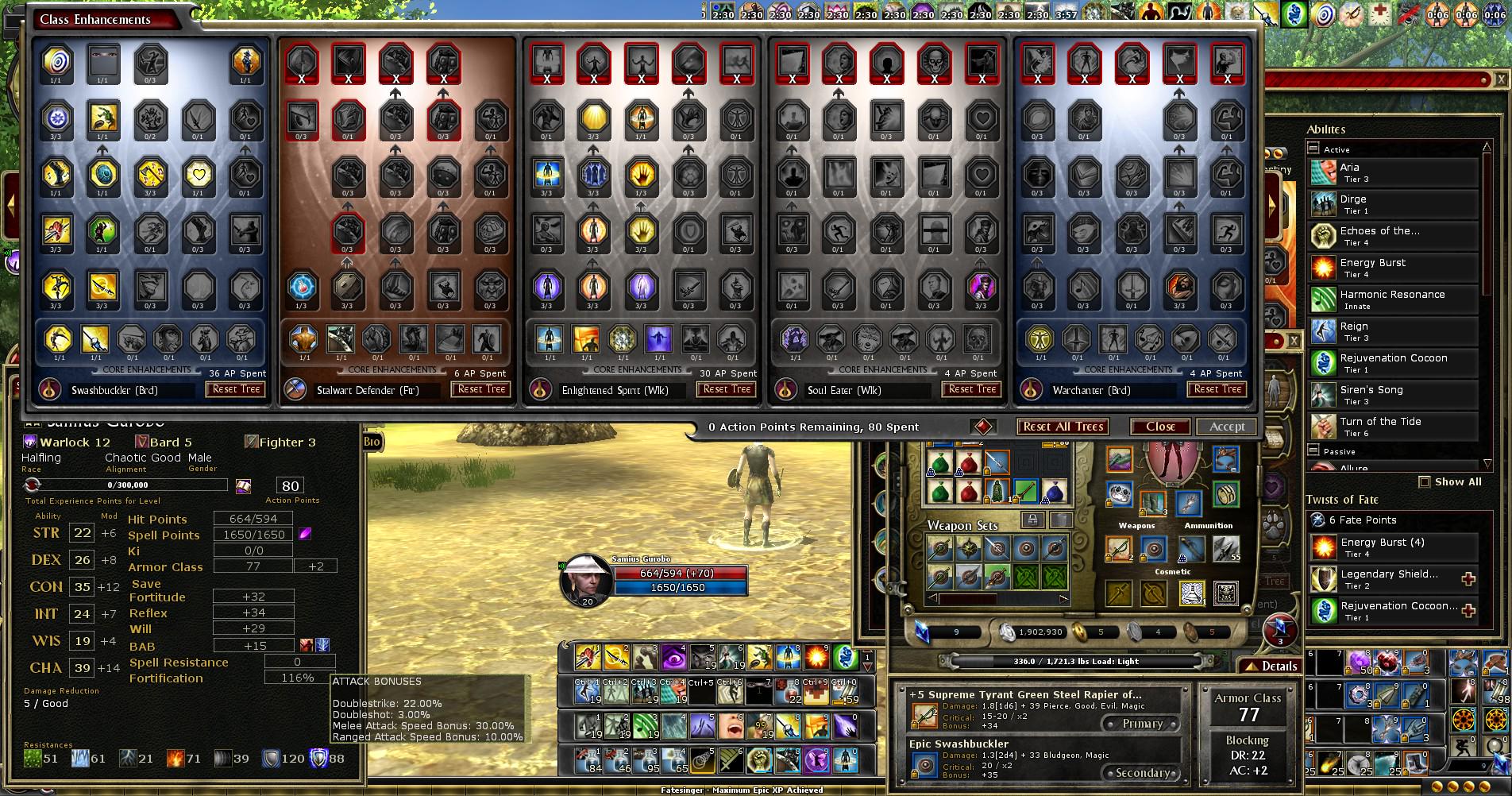 Some easy things to notice changes, i have about 12 more PRR and about 7 more Double Strike. It is not shown but i would bet i have a little more Melee power also, but either of us chose to hover over that break down. Some things that might not jump out at you is he has a few more HPs and i have a lot higher AC (which is meaning less anyway). I assume do to destiny and twist of fate choices.  Also i have “geared up” for level 20-22 something i am not sure Geoff has a ton of level 20 gear ready to go. Oh and one last thing he has a lot more Sonic power then i do/did. I will talk about that is a moment also.

I think Geoff is in Crusader based on his posts, a great choice for this build. I am in Fate singer, a much less good choice but i need to fill my arcane sphere this go around so that is why i am singing vs being in a “good destiny.” But even so i feel unstoppable in most quests. The only time i have died at near level quests were 1, against the ballista’s in Storm the Beaches, i was shot from behind which started a bit of a chain reaction for a moment but was able to pull out of thanks to a rez cake and the strength of the build and teamwork of my leveling partner ie the wife. 2, I pulled the lever in Von3 almost lived died at like -40 or something, btw like a lot of players i am a EE player first time through…. So there is some challenge in what we are doing, it is not like we are just running by on EH.  And we are doing well. Like very well. I think that most of that is on the strength of the Warlock class.

Having said that, watching the wife, Grim and the rest of the guild play their Warlocks had i played one straight, i would have TRed right away. I did the spam damage spells thing for long enough with the Magic Missile wizard, Sorc, Ranged builds even the no DC having divine casters and i am done with that play-style for a while.  But this build is different. A change i need and have been trying to have for awhile. My last live was a Fvs/Pally. It was a lot of fun also and i could do things solo on EE also but it was a lot of work all the time. Check this attack that, do i need a heal? Make sure this buff is running, etc. It was just a lot of work for not as much payoff.

This build does all the things i want my melee to do. AOE damage just by being around, some healing, most important skills covered and solid damage. Not great melee damage but good enough. Add in the Aura ticks and the damage is more then fine. I am even looking forward to having perfect weapon fighting thanks to Reign and other bard powers.

Gearing this version of  Samius is hard. Most of the gear that is best for this build is not stuff i have just laying around. I made a Epic Red dragon suit of armor just to have something light to wear that is not robes. I have been using my green steel weapons since level 12. And had Tobril not talked about the Blade of the High Priestess, i would still be using them.

I did swap to the Blade of the High Priestess, for general mobs. Mostly thanks to Potency +72 boosting my sonic power to the levels Geoff is talking about in his posts. A proper Drow Light Mace of the Weapon Master might be more damage over all but i like what this is doing for now. And i have a Celestia when ever the wife is ready to level up as well as 2 raider’s chests in the event i decide i want a Balizarde. I haven’t decided yet.

Overall, the build in epics so far is really solid. I don’t mean that as anything but the highest of complements. I have played everything from glass cannons to max dps i could muster ranged builds that can solo most EE quests to the support healer that feels that leveling is easy. Wack a mole with Hps is easy in epics, if they die just rez them and move on.

Not to say there aren’t short comings in the build. It would be great to have rogue skills. But to get them you would have to lose the fighter levels which are amazing. You wouldn’t think that they are great but they are. The saves need work, but i am me so i will fail saves no matter what. And you could use a few more 100 hps fairly early into epic elites if you really want to tank bosses. But that is not a huge deal breaker for me.

If you asked me for a grade of 1-10, i would say this is a 9ish. And here is the kicker. I was looking for something to rock a few epic lives with, i need a few more here and there to finish my epic completionist. And i had planed to do so with that FvS/Pally build. But i needed the heroic completionist feat (+2 to all stats was huge for the build) and i lost it when Warlock came out making that build a lot tougher to play. I found Geoff’s build looking for a warlock that would itch the scratch that was bothering me and instead found something that i think will make the divine epic lives easy to complete.

My plan is to level to 28, look at how the world looks then and epic tr and rock back up in Unyielding Sentinel or Divine Crusader. I suspect that the Sentinel will be a touch stronger to play in but maybe not.

It is a fun build and i would much suggest checking it out if you can. Oh and thanks Geoff for posting this build. I think you are on to something great here and as i play it more and learn the ins and outs of the build i will refine things and keep sharing them with everyone, even if you move back to rangggger.